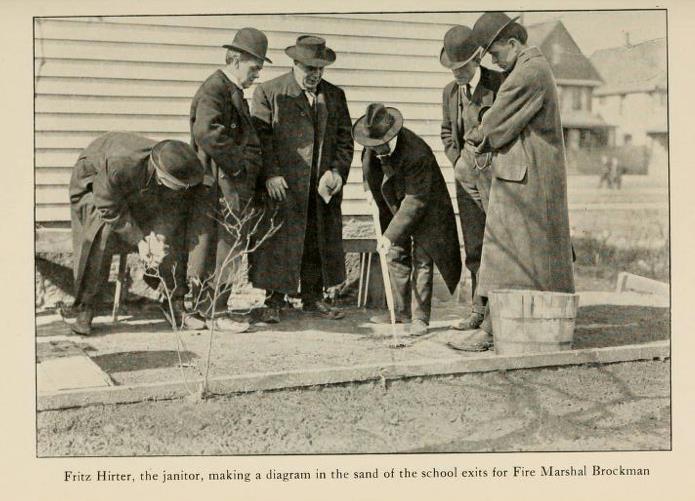 It should be strenuously noted that the following information is in no way an indictment of guilt regarding Mr. Hirter.  Quite the opposite is true. The day was one of severe trauma, madness, and immense loss for so many parents.  Fritz Hirter watched one of his own daughters die, and two of his other children were killed elsewhere in the building.  He, himself, was severely burned trying to save the students trapped in the school.  In the aftermath of the bedlam, Mr. Hirter was brought in to give testimony to the school board the evening of the fire, a session that stretched well past midnight – this despite his serious burns and the significant trauma of the day’s events and his own personal losses. The narrative below is more an examination of the extended victimization that occurs following significantly traumatic events.

It should also be noted that Mr. Hirter went on to serve the Cleveland Public School system with honor for nearly forty years.

Fritz Hirter was the janitor at the school that fateful day in 1908.  He maintained the boilers and the building that was Lakeview School.  He remains somewhat of an enimga regarding that day’s events.  He gave conflicting statements regarding his actions the morning of the fire.

He also lost three of his own children that day.

The statement information included here is important when telling the stories of that day.  The fire occurred in a day when post-traumatic stress disorder (PTSD) was unheard of when it came to traumatic events like the fire.  In totality, it is not difficult to see some defense mechanisms kick in during the few times Mr. Hirter spoke of the incident, nor should it be surprising.

An issue of note is the location of the three girls in his statements.  These three children are of particular interest in his statements because they change location each time Mr. Hirter comments.  They go from standing inside a closet playing a game to running through the basement to being seen on the first floor.

Also of note are the statements give by Anna Neubert, age 13 who was a student at the school, who claims she was the one to notify Mr. Hirter from the top of the stairs leading to the basement.  Her story is fairly complex, especially when it is given during the school board inquiry the day of the fire, near midnight.

The following are different statements Mr. Hirter gave to describe his actions just prior to and during the fire:

–  “I was sweeping in the basement when I looked up and saw a wisp of smoke curling out from beneath the front stairway.  I ran to the fire alarm and pulled the gong hat sounded throughout the building.  Then I ran first to the front and then to the rear doors and threw them open, as the rules prescribed.”  (41, 120 – 121)

–  “I was sweeping in the basement when three little girls came running through.  Suddenly, I looked up and saw a wisp of smoke curling from beneath the stairway.” (121)

–  “At 9:30, I went down and found the steam to be down to a pound or a pound and a half.  The fire was very low.  I just shoveled in two or three shovelfuls of coal in each furnace.  Then I shut the dampers and swept the basement, the fire pit, as usual.  Then a little girl came down the stairway.  She called to me and said there was a fire in the building.  I told her to run out.  I went and rang the bell.  I notified the teachers.  I tried to open the windows and knocked them out when I couldn’t.  I think there were three girls in the hall.  If you were to kill me, I couldn’t tell you what girl it was that called me.” (131)

–  “There were three or four girls hiding in the closet. I can’t tell any of their names. They had been attending the school three, four, or five years.  They were about ten years old.  I could tell them by sight. I never heard their last names.  One of them was named Lizzie.  One was Anna.  One was Mary.  If they are living yet, I don’t know.  They were playing hide-and-seek.  It happened many times like that.  They were just standing there in the closet, all three, waiting for some girl to come and find them. I don’t know what girl was to find them. They closed the door and stood inside in the dark.  I heard them laughing.  I opened the door and chased them out.  The door has only a catch with a knob inside and out.” (137)

–  “Around 9:30 a.m., a little girl appeared in front of him. ‘The basement is on fire!’ she shouted, pointing to smoke curling from under the basement stairs.” (R. Dissell, Cleveland Plain Dealer, March 2, 2008, “Collinwood School Fire: 100 Years Later, an Angel Still Kneels Over the Children”.)

If we take inventory of his statements, we can deduce the following common factors that are repeated in each version.  Whether or not they are fact will never be known.  This is simply a comparison of repeated elements of his statements and corroborating testimony and investigative evidence.